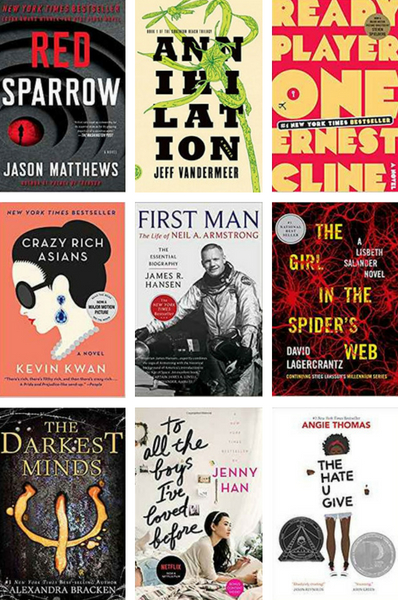 State intelligence officer Dominika Egorova struggles to survive in the cast-iron bureaucracy of post-Soviet intelligence. Drafted against her will to become a “Sparrow,” a trained seductress in the service, Dominika is assigned to operate against Nathaniel Nash, a first-tour CIA officer who handles the CIA’s most sensitive penetration of Russian intelligence. The two young intelligence officers, trained in their respective spy schools, collide in a charged atmosphere of tradecraft, deception, and, inevitably, a forbidden attraction that threatens their careers and the security of America’s most valuable mole in Moscow.

Four women — a biologist, a psychologist, a surveyor, and an anthropologist — set out on a scientific expedition to Area X, a quarantined zone that defies all attempts to map its terrain or understand its nature. Eleven previous missions have failed; is the twelfth time the charm, or will these intrepid explorers join their predecessors as casualties of Area X?

Immersing himself in a mid-twenty-first-century technological virtual utopia to escape an ugly real world of famine, poverty, and disease, Wade Watts joins an increasingly violent effort to solve a series of puzzles by the virtual world’s creator.

When her notorious, hilarious, volatile, talented, troubled and agoraphobic mother goes missing, teenage Bee begins a trip that takes her to the ends of the earth to find her.

Envisioning a summer vacation in the humble Singapore home of a boy she hopes to marry, Chinese American Rachel Chu is unexpectedly introduced to a rich and scheming clan that strongly opposes their son’s relationship with an American girl.

Sixteen-year-old Ruby breaks out of a government-run “rehabilitation camp” for teens who acquired dangerous powers after surviving a virus that wiped out most American children.

To All the Boys I’ve Loved Before by Jenny Han
PHPL Call Number: YA F HAN

The Hate U Give by Angie Thomas
PHPL Call Number: YA F THO

At age 19, Garrard, the son of a Baptist pastor and deeply embedded in church life in small town Arkansas, was outed to his parents and forced to make a life-changing decision: either agree to attend a church-supported conversion therapy program that promised to “cure” him of homosexuality; or risk losing family, friends, and the God he had prayed to every day of his life.

First Man by James Hansen offers the only authorized glimpse into the life of America’s most famous astronaut Neil Armstrong-the man whose one small step changed history. Based on over fifty hours of interviews with the intensely private Armstrong who also gave Hansen exclusive access to private documents and family sources.

In this this stand-alone sequel to Stieg Larsson’s “Millennium” trilogy “Lisbeth Salander, a genius hacker, and Mikael Blomkvist, a crusading journalist, are drawn into a tangled web of spies, cybercriminals, and government operatives.

In January 1946, London is beginning to recover from World War II, and Juliet Ashton is looking for a subject for her next book. She finds it in her correspondence with a native of Guernsey, who tells her about the Guernsey Literary and Potato Peel Pie Society, a book club born as an alibi during German occupation.

The wind brings four English children a new nanny who slides up the banister and introduces them to some delightful people and experiences.

Movie Title: Mary Poppins Returns
The Movie: A now-grown Jane and Michael Banks, along with Michael’s three children, are visited by the enigmatic Mary Poppins following a personal loss.