[These books contain little to no violence, sexual situations, or language.] 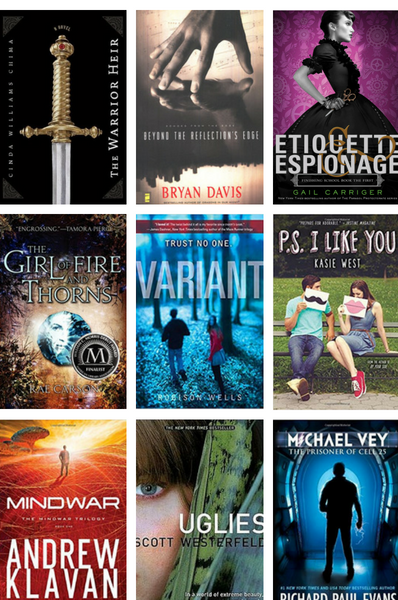 Of Poseidon (The Syrena Legacy #1) by Anna Banks (YA F BAN) Galen, prince of the Syrena, is sent to land to find a girl he’s heard can communicate with fish. He finds Emma and becomes convinced she holds the key to his kingdom.

Etiquette and Espionage (Finishing School #1) by Gail Carriger (YA F CAR) In an alternate England of 1851, spirited fourteen-year-old Sophronia is enrolled in a finishing school where lessons include not only the fine arts of dance, dress, and etiquette, but also diversion, deceit, and espionage.

I’d Tell You I Love You, But Then I’d Have To Kill You (Gallagher Girls #1) by Ally Carter (YA F CAR)  As a sophomore at a secret spy school, Cammie is sheltered from “normal teenage life” until she meets a local boy while on a mission.

The Selection (The Selection #1) by Kiera Cass (YA F CAS) Sixteen-year-old America Singer is chosen to compete in the Selection–a contest to see which girl can win the heart of the prince–but all she really wants is a chance for a future with her secret love, Aspen.

The Warrior Heir (The Heir Chronicles #1) by Cinda Williams Chima (YA F CHI)  After learning about his magical ancestry and his own warrior powers, sixteen-year-old Jack embarks on a training program to fight enemy wizards.

Artemis Fowl (Artemis Fowl #1) by Eoin Colfer (JF COL) When a twelve-year-old evil genius tries to restore his family fortune by capturing a fairy and demanding a ransom in gold, the fairies fight back with magic, technology, and a particularly nasty troll.

The Naming (Books of Pellinor #1) by Alison Croggon (YA F CRO) A manuscript from the lost civilization of Edil-Amarandah chronicles the experiences of sixteen-year-old Maerad, an orphan gifted in the magic and power of the Bards, as she escapes from slavery and begins to learn how to use her Gift to stave off the evil Darkness that threatens to consume her world.

Beyond the Reflection’s Edge (Echoes from the Edge #1) by Bryan Davis (YA F DAV) After losing his parents, sixteen-year-old Nathan carries on his father’s work, which leads him through a strange mirror into another world where dark forces await him.

Chosen (The Lost Books #1) by Ted Dekker (YA F DEK) The supreme commander of the Forest Guard  chooses four sixteen-year-old recruits for a special mission–to find the seven lost Books of History that have power over the past, present, and future.

Love is in the Air by A. Destiny (YA F DES) When fifteen-year-old Jennifer attends circus camp to reach her dream of being a trapeze artist, she learns she is afraid of heights, but after one glimpse of Branden, the best trapeze artist at the camp, Jennifer begins falling for him, too.

The Healer’s Apprentice (Hagenheim #1) by Melanie Dickerson (YA F DIC) A romantic series set in Medieval Germany with plots loosely based on fairy tales.

The Prisoner of Cell 25 (Michael Vey #1) by Richard Paul Evans (YA F EVA) Michael Vey, a fourteen-year old, must rely on his special powers to save himself and others from a diabolical group seeking to control them.

The Lost Girl of Astor Street by Stephanie Morril (YA F MOR) Investigating the disappearance of her best friend in 1920s Chicago, 17-year-old Piper follows clues leading to local corruption and some of the community’s wealthiest and most powerful families.

The Ruins of Gorlan (The Ranger’s Apprentice Chronicles #1) by John Flanagan (YA F FLA) Join Wil Treaty, an apprentice Ranger, as he endeavors to protect the kingdom of Araluen under the guidance of his mentor Halt and with the help of his best friend Horace in this action-packed fantasy series.

Princess of the Midnight Ball (Princesses of Westfalin #1) by Jessica Day George (YA F GEO) A retelling of the tale of twelve princesses who wear out their shoes dancing every night.

The Goose Girl (Books of Bayern #1) by Shannon Hale (YA F HAL) On her way to marry a prince she’s never met, Princess Anidori is betrayed by her guards and her lady-in-waiting and must become a goose girl to survive until she can reveal her true identity and reclaim the crown that is rightfully hers.

Seraphina (Seraphina #1) by Rachel Hartman (YA F HAR) In a world where dragons and humans coexist in an uneasy truce and dragons can assume human form, Seraphina, whose mother died giving birth to her, grapples with her own identity amid magical secrets and royal scandals, while she struggles to accept and develop her extraordinary musical talents.

Howl’s Moving Castle by Diana Wynne Jones (YA F JON) Eldest of three sisters in a land where it is considered to be a misfortune, Sophie is resigned to her fate as a hat shop apprentice until a witch turns her into an old woman and she finds herself in the castle of the greatly feared wizard Howl.

Keeping the Castle by Patrice Kindl (YA F KIN) In order to support her family and maintain their ancient castle in Lesser Hoo, seventeen-year-old Althea bears the burden of finding a wealthy suitor who can remedy their financial problems.

Mindwar (Mindwar #1) by Andrew Klavan (YA F KLA) In the tradition of “Ender’s Game” and “The” “Matrix,” “MindWar” is a complex thriller about a seemingly ordinary teenager who discovers a hidden gift–a gift that could make him a hero . . . or cost him everything.

Black Ice (Sherlock Holmes: The Legend Begins #1) by Andrew Lane (YA F LAN) In 1868, teenaged Sherlock Holmes faces danger in a train station for the dead, a museum of curiosities, and downtown Moscow as he helps his brother, Mycroft, who has been framed for murder.

A Wizard of Earthsea (The Earthsea Cycle #1) by Ursula Le Guin (YA F LEG) During a spell recalling the dead, the boy Sparrowhawk, a sorcerer’s apprentice, unwittingly unleashes evil on the land. He grows to manhood while attempting to subdue the evil he unleashed on the world.

Cinder (The Lunar Chronicles #1) by Marissa Meyer (YA F MEY) As plague ravages the overcrowded Earth, observed by a ruthless lunar people, Cinder, a gifted mechanic and cyborg, becomes involved with handsome Prince Kai and must uncover secrets about her past in order to protect the world in this futuristic take on the Cinderella story.

The False Prince (The Ascendance trilogy #1) by Jennifer A. Nielsen (YA F NIE) In the country of Carthya, a devious nobleman engages four orphans in a brutal competition to be selected to impersonate the king’s long-missing son in an effort to avoid a civil war.

Airborn (Matt Cruse #1) by Kenneth Oppel (YA F OPP) Matt, a young cabin boy aboard an airship, and Kate, a wealthy young girl traveling with her chaperone, team up to search for the existence of mysterious winged creatures reportedly living hundreds of feet above the Earth’s surface.

The Hired Girl by Laura Amy Schlitz (YA F SCH) Fourteen-year-old Joan Skraggs chronicles her life in a journal when she leaves her family’s farm in Pennsylvania to work as a hired girl in Baltimore in the summer of 1911.

The Statistical Probability of Love at First Sight by Jennifer E. Smith (YA F SMI) Seventeen-year-old Hadley misses her flight to London by just four minutes and gets rebooked on another flight…where she meets Oliver.

Stargirl (Stargirl #1) by Jerry Spinelli (YA F SPI) In this story about the perils of popularity, the courage of nonconformity, and the thrill of first love, an eccentric student named Stargirl changes Mica High School forever.

Nora and Kettle by Lauren Nicolle Taylor (YA F TAY) When the daughter of a violent civil rights lawyer and an orphaned Japanese-American who was interned during World War II, meet, the event is devastating and ultimately healing.

The Thief (The Queen’s Thief #1) by Megan Whalen Turner (YA F TUR) Gen flaunts his ingenuity as a thief and relishes the adventure which takes him to a remote temple of the gods where he will attempt to steal a precious stone.

Variant (Variant #1) by Robison Wells (YA F WEL) When Benson Fisher is accepted into Maxfield Academy, he’s relieved to escape from the foster care system and excited to make a fresh start. But soon after the doors of the boarding school lock behind him, Benson realizes that he’s made a huge mistake. Students at Maxfield are trapped, under constant surveillance, and at war with each other — and the punishment for rule-breakers is death.

P.S. I Like You by Kasie West (YA F WES) Every day in chemistry class, high school student and aspiring songwriter Lily Abbott finds love letters. When she finds out they are really from, she’s shocked.

Uglies (Uglies #1) by Scott Westerfeld (YA F WES) Just before their sixteenth birthdays, when they will be transformed into beauties whose only job is to have a great time, Tally’s best friend runs away and Tally must find her and turn her in, or never become pretty at all.

Leviathan (Leviathan #1) by Scott Westerfeld (YA F WES) In an alternate 1914 Europe, fifteen-year-old Austrian Prince Alek, on the run from the Clanker Powers who are attempting to take over the globe using mechanical machinery, forms an uneasy alliance with Deryn who, disguised as a boy to join the British Air Service, is learning to fly genetically-engineered beasts.