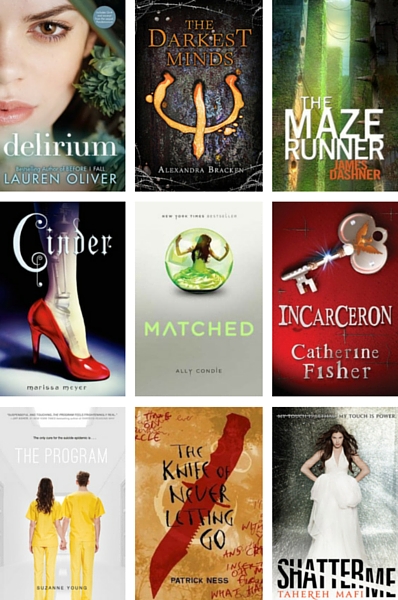 In the aftermath of war and plague, most of New York City’s survivors have moved underground, establishing enclaves where they eke out an existence and hide from zombie-like Freaks. After 15-year-old Deuce, an enclave-dweller, earns the rank of Huntress, she is paired with a mysterious outsider named Fade…and the two of them discover a secret that could destroy their precarious society.

When her latent supernatural powers manifest in front of a noble court, Mare, a thief in a world divided between commoners and superhumans, is forced to assume the role of lost princess before risking everything to help a growing rebellion.

In a futuristic world, teenaged Nailer scavenges copper wiring from grounded oil tankers for a living, but when he finds a beached clipper ship with a girl in the wreckage, he has to decide if he should strip the ship for its wealth or rescue the girl.

Seventeen-year-old Alex is on a solo camping trip in the woods (and playing hooky from her seemingly pointless chemo treatments) when a series of electromagnetic pulses renders all technology useless, kills most of Earth’s population, and turns many of those left alive into ravenous, bloodthirsty cannibals. But Alex isn’t entirely alone; she teams up with an eight-year-old girl and a young soldier on leave who, like her, weren’t transformed by the pulses, and the three of them fight together for survival.

Sixteen-year-old Ruby breaks out of a government-run “rehabilitation camp” for teens who acquired dangerous powers after surviving a virus that wiped out most American children.

In the year 2051, when most Americans live in one of two gigantic, modern States, Faith Daniels, part of a dwindling group that lives between, learns that she, like other misfits, has unusual abilities that could help when the inevitable war begins.

The Selection (Selection #1) by Kiera Cass (YA F CAS)

Sixteen-year-old America Singer is living in the caste-divided nation of Illea, which formed after the war that destroyed the United States. America is chosen to compete in the Selection–a contest to see which girl can win the heart of Illea’s prince–but all she really wants is a chance for a future with her secret love, Aspen, who is a caste below her.

The Testing (Testing #1) by Joelle Charbonneau (YA F CHA)

Sixteen-year-old Malencia (Cia) Vale is chosen to participate in The Testing to attend the University; however, Cia is fearful when she figures out her friends who do not pass The Testing are disappearing.

Cassia has always trusted the Society to make the right choices for her, so when Xander appears on-screen at her Matching ceremony, Cassia knows he is her ideal mate–until Ky Markham’s face appears for an instant before the screen fades to black.

Sixteen-year-old Thomas wakes up with no memory in the middle of a maze and realizes he must work with the community in which he finds himself if he is to escape.

After an earthquake destroys California and a tsunami wrecks the luxury cruise ship where he is a summer employee, high schooler Shy confronts another deadly surprise.

Kyle McAdams races to find out what’s killing kids conceived at the Genesis Innovations Laboratory, before he becomes yet another perfect, blue-eyed corpse…

Violet, a poor girl from the outer city, finds forbidden romance and uncovers brutal secrets when, after three years of training, she is purchased by a royal family as a surrogate mother for royal children.

To free herself from an upcoming arranged marriage, Claudia, the daughter of the Warden of Incarceron, a futuristic prison with a mind of its own, decides to help a young prisoner escape.

Date with a Rockstar by Sarah Gagnon (YA F GAG)

Monet tries to win a reality show, and the love of a rock star, in order to afford the cure for her disease, an illness that is contagious via saliva, but when it becomes clear that her secret illness might be revealed, she has to come clean.

In a small town on the coast of California, everyone over the age of fourteen suddenly disappears, setting up a battle between the remaining town residents and the students from a local private school, as well as those who have “The Power” and are able to perform supernatural feats and those who do not.

In a dark future, when North America has split into two warring nations, fifteen-year-olds Day, a famous criminal, and prodigy June, the brilliant soldier hired to capture him, discover that they have a common enemy.

Ostracized or incarcerated her whole life, seventeen-year-old Juliette is freed on the condition that she use her horrific abilities in support of The Reestablishment, a postapocalyptic dictatorship, but Adam, the only person ever to show her affection, offers hope of a better future.

As plague ravages the overcrowded Earth, observed by a ruthless lunar people, Cinder, a gifted mechanic and cyborg, becomes involved with handsome Prince Kai and must uncover secrets about her past in order to protect the world in this futuristic take on the Cinderella story.

After the eruption of the Yellowstone supervolcano destroys his city and its surroundings, fifteen-year-old Alex must journey from Cedar Falls, Iowa, to Illinois to find his parents and sister, trying to survive in a transformed landscape and a new society in which all the old rules of living have vanished.

Pursued by power-hungry Prentiss and mad minister Aaron, young Todd and Viola set out across New World searching for answers about his colony’s true past and seeking a way to warn the ship bringing hopeful settlers from Old World.

In future world decimated by climate change, apprentice midwife Gaia lives along the shore of what used to be Lake Michigan, helping her mother deliver babies and making sure to “advance” the required three newborns per month to the exclusive, walled-in Enclave. Gaia is forced to infiltrate the Enclave herself after her parents are arrested as traitors, and though she finds help (maybe even love?) from someone unexpected, she also uncovers devastating secrets that shatter her understanding of her society.

High school senior Lena Haloway is counting the 95 days until her appointment to undergo the operation that every citizen has at age 18 to prevent them from contracting amor deliria nervosa — love, which is seen as a deadly disease. At first, Lena is eager for the surgery, believing it will make her life happy and safe. But then she meets handsome and enigmatic Alex, and she’s not so sure anymore.

In a future Chicago, sixteen-year-old Beatrice Prior must choose among five predetermined factions to define her identity for the rest of her life, a decision made more difficult when she discovers that she is an anomaly who does not fit into any one group, and that the society she lives in is not perfect after all.

Seventeen-year-old Anna finds herself on the run from her father’s enigmatic Agency, along with the four teen boys the Agency had been experimenting on, as they try to make sense of erased memories, secret identities, and genetic alteration.

Laia is a Scholar living under the iron-fisted rule of the Martial Empire. When her brother is arrested for treason, Laia goes undercover as a slave at the empire’s greatest military academy in exchange for assistance from rebel Scholars who claim that they will help to save her brother from execution.

Just before their sixteenth birthdays, when they will will be transformed into beauties whose only job is to have a great time, Tally’s best friend runs away and Tally must find her and turn her in, or never become pretty at all.

Cassie Sullivan, the survivor of an alien invasion, must rescue her young brother from the enemy with help from a boy who may be one of them.

When suicide becomes a worldwide epidemic, the only known cure is The Program, a treatment in which painful memories are erased, a fate worse than death to seventeen-year-old Sloane who knows that The Program will steal memories of her dead brother and boyfriend.