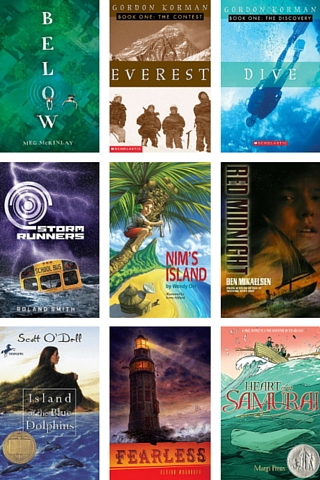 Books can be found shelved alphabetically under the author’s last name in the fiction section (F).

Amazon: You Decide How to Survive by David Borgenicht (F)

From mountain to jungle on the Amazon River in this decide-the-ending story.

A group of kids compete for the chance to be the youngest person to climb Mount Everest in this series about danger and survival at the height of the world.

Six kids must learn to work together to survive a vicious storm and a shipwreck that leave them stranded in the middle of the ocean.

Below by Meg McKinlay (F)

Mystery surrounds an abandoned town that is located – underwater!

Island of the Blue Dolphins by Scott O’Dell (F)

Left alone on a beautiful but isolated island, a young Indian girl spends eighteen years not only merely surviving through her enormous courage and self-reliance, but also finding happiness in her solitary life.

Nim loves her island home and the animals she shares it with even while her scientist father is away doing research, but trouble is on the way and a new e-mail friend could be the only one who can help.

In 1841, rescued by an American whaler after a terrible shipwreck, fourteen-year-old Manjiro becomes one of the first Japanese people to set foot in the United States.

Twelve-year-old Chase Masters travels the country with his father, a “storm runner,” but he is tested in ways he never could have imagined when he and a new friend are caught in a hurricane near St. Petersburg, Florida.

Sign of the Beaver by Elizabeth George Speare (F)

Eleven-year-old Digory must survive a monster storm in a lighthouse on a treacherous reef.