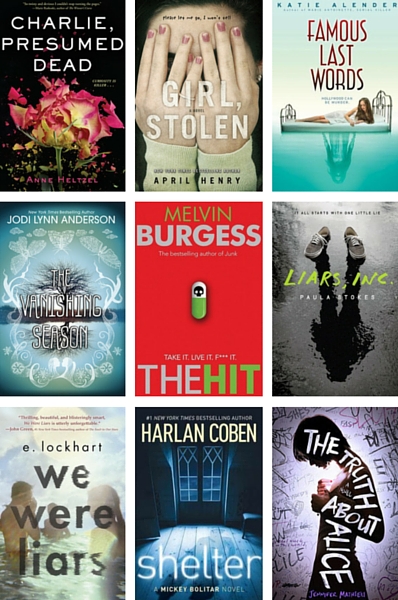 Willa keeps seeing things that are not really there, like a dead body in the swimming pool, and her visions may be connected to a serial killer that is stalking young girls in Hollywood.

The Vanishing Season by Jodi Lynn Anderson (YA F AND)

Missing city life after moving to a sleepy town in Michigan, Maggie bonds with restless but dutiful Pauline during a summer that is shattered by a killer targeting teen girls.

The Hit by Melvin Burgess (YA F BUR)

There is a new drug on the mean streets of Manchester which promises the most intense week of your life, and then you are dead.

A teenage girl wakes up on the Los Angeles subway tracks with no memory of who she is or how she got there. Now she must race to uncover her past and outwit her hunters before it’s too late.

A Study in Charlotte: a Charlotte Holmes novel by Brittany Cavallaro (YA F CAV)

Sherlock Holmes and Dr. Watson descendants, Charlotte and Jamie, students at a Connecticut boarding school, team up to solve a murder mystery.

When Micky Bolitar’s new girlfriend, Ashley, vanishes, he follows her trail into a seedy underworld that reveals she is not what she seems.

Blood and Ink by Stephen Davies (YA F DAV)

Kadija is the music-loving daughter of a guardian of the library in the ancient city of Timbuktu, Ali is a former shepherd boy, trained by Islamist militants–and both are caught up in the war in Mali and on opposite sides of the stuggle to save the sacred Sufi manuscripts that the militants want to destroy.

Lena and Aubrey, each hiding her own secrets, set off in search of the truth about Charlie, including if he is really dead, after meeting at his funeral and learning that he was dating both of them.

When an impulsive carjacking turns into a kidnapping, Griffin, a high school dropout, finds himself more in sympathy with his victim, sixteen-year-old Cheyenne, than with his greedy father.

We Were Liars by E. Lockhart (YA F LOC)

Surprising, thrilling, and beautifully executed in spare, precise, and lyrical prose, Lockhart spins a tragic family drama, the roots of which go back generations. And the ending? Shhhh. Not telling.

The Truth About Alice by Jennifer Mathieu (YA F MAT)

When ugly rumors and lies about Alice Franklin start after one of the guys she allegedly slept with at a party dies in a car accident, questions about truth arise in her small town.

The Arsonist by Stephanie Oakes (YA F OAK)

Molly Mavity and Pepper Yusef are dealing with their own personal tragedies when they are tasked by an anonymous person with solving the decades-old murder of Ava Dryman, an East German teenager whose diary was published after her death.

Sisters Dara and Nick’s strained relationship, the boy who came between them, and the sudden disappearance of a nine-year-old girl bring secrets of a local underworld too close to home.

Pretty Little Liars (series) by Sara Shepard (YA F SHE)

When one of their tightly-knit group mysteriously disappears, four high school girls begin receiving taunting messages from someone who seems to know everything about their past and present secrets.

Seventeen-year-old Max, his girlfriend Parvati, and best friend Pres form Liars, Inc., expecting that forging notes and lying for their peers will lead to easy cash, but when Pres asks Max to cover for him, it may be a fatal mistake.

Little Monsters by Kara Thomas (YA F THO)

When Kacey moves in with her estranged father and his new family, her new friend goes missing and Kacey finds herself at the center of the investigation.