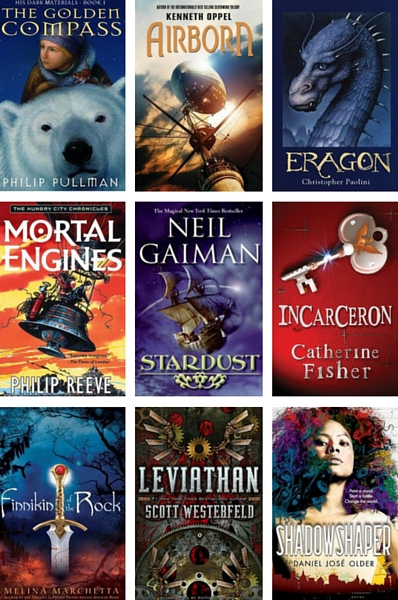 The Hazel Wood by Melissa Albert (YA F ALB)

Seventeen-year-old Alice and her mother have spent most of Alice’s life on the road, always a step ahead of the uncanny bad luck biting at their heels. But when Alice’s grandmother, the reclusive author of a cult-classic book of pitch-dark fairy tales, dies alone on her estate, the Hazel Wood, Alice learns how bad her luck can really get: Her mother is stolen away—by a figure who claims to come from the Hinterland, the cruel supernatural world where her grandmother’s stories are set.

In the town of Fairfold, where humans and fae exist side by side, a boy with horns on his head and ears as pointed as knives awakes after generations of sleep in a glass coffin in the woods, causing Hazel to be swept up in new love, shift her loyalties, feel the fresh sting of betrayal, and to make a secret sacrifice to the faerie king.

In this near-future retelling of the Dickens classic “A Tale of Two Cities,” a deadly revolution breaks out in a New York City divided by light and dark magic.

After learning about his magical ancestry and his own warrior powers, sixteen-year-old Jack embarks on a training program to fight enemy wizards.

The Belles by Dhonielle Clayton (YA F CLA)

Born one of the revered Belles in the opulent world of Orleans, where people are naturally born gray and seek the talented Belles to transform themselves with beauty, Camellia dreams of being declared the queen’s favorite before her arrival at court exposes dark and dangerous realities within the palace walls.

In this story loosely based on the Sleeping Beauty fairy tale, seventeen-year-old Rose, a healer’s apprentice, falls in love with the betrothed Lord Hamlin, who is seeking the sorcerer who cursed his future bride.

To free herself from an upcoming arranged marriage, Claudia, the daughter of the Warden of Incarceron, a futuristic prison with a mind of its own, decides to help a young prisoner escape.

When fifteen-year-old Will is rejected by battleschool, he becomes the reluctant apprentice to the mysterious Ranger Halt, and winds up protecting the kingdom from danger.

Living in a Victorian countryside town overshadowed by an imposing stone barrier, Tristran is compelled to retrieve a fallen star for the woman he loves and crosses to the wondrous other side of the barrier, where he encounters dangerous rivals for the star.

Supernatural “energy dragons” control all of Earth’s energies. Young men compete for the honor of being apprenticed to one of the Dragoneyes, powerful men who communicate and bargain with the dragons on behalf of the people. Sixteen-year-old Eon has been training hard, but, due to an old injury and the fact that “he” is really a girl in disguise, is the least likely to be chosen.

After she has served a year of hard labor in the salt mines of Endovier for her crimes, Crown Prince Dorian offers eighteen-year-old assassin Celaena Sardothien her freedom on the condition that she act as his champion in a competition to find a new royal assassin.

Now on the cusp of manhood, Finnikin, who was a child when the royal family of Lumatere was brutally murdered and replaced by an imposter, reluctantly joins forces with an enigmatic young novice and fellow-exile, who claims that her dark dreams will lead them to a surviving royal child and a way to regain the throne of Lumatere.

When the murals painted on the walls of her Brooklyn neighborhood start to change and fade in front of her, Sierra Santiago realizes that something strange is going on–then she discovers her Puerto Rican family are shadowshapers and finds herself in a battle with an evil anthropologist for the lives of her family and friends.

Matt, a young cabin boy aboard an airship, and Kate, a wealthy young girl traveling with her chaperone, team up to search for the existence of mysterious winged creatures reportedly living hundreds of feet above the Earth’s surface.

In Alagaesia, a fifteen-year-old boy of unknown lineage called Eragon finds a mysterious stone that weaves his life into an intricate tapestry of destiny, magic, and power, peopled with dragons, elves, and monsters.

Fifteen-year-old Ian Quicksilver has discovered the unsettling truth that he is not a scraggly cast-off, bouncing around in the Nevada foster care system like an unpicked lottery ball, but the Last Warrior Prince of a distant planet threatened by a sociopathic magician.

After a devastating tsunami destroys all that they have ever known, Mau, an island boy, and Daphne, an aristocratic English girl, together with a small band of refugees, set about rebuilding their community and all the things that are important in their lives.

Accompanied by her shape-shifting daemon, Lyra Belacqua sets out to prevent her best friend and other kidnapped children from becoming the subject of gruesome experiments in the Far North.

In the distant future, when cities move about and consume smaller towns, a fifteen-year-old apprentice is pushed out of London by the man he most admires and must seek answers in the perilous Out-Country, aided by one girl and the memory of another.

When Nick and Allie are killed in a car crash, they end up in Everlost, or limbo for lost souls, where although Nick is satisfied, Allie will stop at nothing–even skinjacking–to break free.

After being kidnapped and barely escaping, sixteen-year-old Jack goes to London with his best friend Connor, where someone gives him a pair of glasses that send him to an alternate universe where war is raging, he is responsible for the survival of two younger boys, and Connor is trying to kill them all.

Gen flaunts his ingenuity as a thief and relishes the adventure which takes him to a remote temple of the gods where he will attempt to steal a precious stone.

In an alternate 1914 Europe, fifteen-year-old Austrian Prince Alek, on the run from the Clanker Powers who are attempting to take over the globe using mechanical machinery, forms an uneasy alliance with Deryn who, disguised as a boy to join the British Air Service, is learning to fly genetically-engineered beasts.