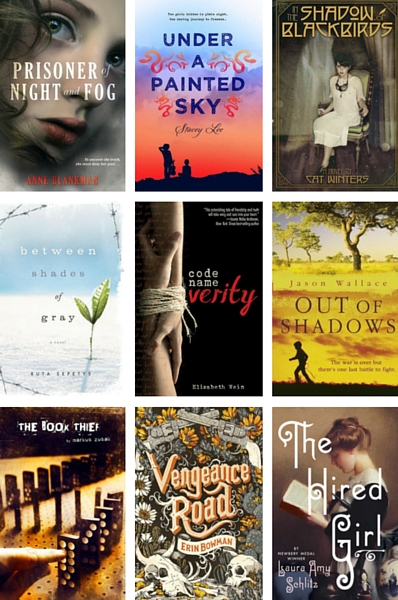 Flame in the Mist by Renée Ahdieh (YA F AHD)

The daughter of a prominent samurai in feudal Japan is targeted by a dangerous gang of bandits who want to prevent her political marriage, a situation that compels her to disguise herself as a boy and infiltrate the gang’s ranks in order to stop the individual behind the plot

The Astonishing Life of Octavian Nothing, Traitor to the Nation, Vol I: The Pox Party by M.T. Anderson (YA F AND)

At the dawn of the Revolutionary War, young Octavian is raised in highly unusual circumstances. As he grows older, Octavian learns the horrifying truth of his situation, and that truth leads him to question his understanding of himself and the Revolution: if the Patriots can fight for their freedom, why can’t he fight for his?

In 1930s Munich, the favorite niece of rising political leader Adolph Hitler is torn between duty and love after meeting a fearless and handsome young Jewish reporter.

When her father is killed by the notorious Rose Riders for a mysterious journal that reveals the secret location of a gold mine, eighteen-year-old Kate Thompson disguises herself as a boy and takes to the gritty plains looking for answers–and justice.

The Diviners by Libba Bray (YA F BRA)

Seventeen-year-old Evie O’Neill is thrilled when she is exiled from small-town Ohio to New York City in 1926, even when a rash of occult-based murders thrusts Evie and her uncle, curator of The Museum of American Folklore, Superstition, and the Occult, into the thick of the investigation.

A Northern Light by Jennifer Donnelly (YA F DON)

In 1906, sixteen-year-old Mattie, determined to attend college and be a writer against the wishes of her father and fiance, takes a job at a summer inn where she discovers the truth about the death of a guest. Based on a true story.

Andi Alpers is so full of grief, rage, and antidepressants that nothing matters to her anymore — nothing except playing guitar and taking care of her severely depressed mother. She’s on the verge of being expelled from her exclusive prep school when her distant father forces Andi to accompany him on a trip to Paris. In Paris, Andi finds the diary of Alexandrine, a young woman who lived during the French Revolution. She becomes obsessed with Alexandrine’s life and the historical mystery it could solve.

Two fifteen-year-old girls–one a slave and the other an indentured servant–escape their Carolina plantation and try to make their way to Fort Moses, Florida, a Spanish colony that gives sanctuary to slaves.

The Musician’s Daughter by Susanne Dunlap (YA F DUN)

In eighteenth-century Vienna, Austria, fifteen-year-old Theresa seeks a way to help her mother and brother financially while investigating the murder of her father, a renowned violinist in Haydn’s orchestra at the court of Prince Esterhazy, after his body is found near a gypsy camp.

When slaves rebel in ancient Sparta, twelve-year-old Lysander, guarded by an heirloom amulet, the Fire of Ares, is caught between the Spartan ruling class, with whom he has been training as a warrior since his noble heritage was revealed, and those among whom he was recently laboring as a slave.

Will Scarlet shadows Robin Hood, with an unerring eye for finding treasures to steal and throwing daggers with deadly accuracy, but when Gisbourne, a ruthless bounty hunter, is hired by the sheriff to capture Robin and his band of thieves, Robin must become Will’s protector risking his own life in the process.

Two friends on a Grand Tour of 18th-century Europe stumble across a magical artifact that leads them from Paris to Venice in a dangerous manhunt shaped by pirates, highwaymen and their growing attraction to one another.

Under a Painted Sky by Stacey Lee (YA F LEE)

In 1845, Sammy, a Chinese American girl, and Annamae, an African American slave girl, disguise themselves as boys and travel on the Oregon Trail to California from Missouri.

March: Book One by John Robert Lewis (YA F LEW)

A first-hand account of the author’s lifelong struggle for civil and human rights spans his youth in rural Alabama, his life-changing meeting with Martin Luther King, Jr., and the birth of the Nashville Student Movement.

The Lost Crown by Sarah Miller (YA F MIL)

In alternating chapters, Grand Duchesses Olga, Tatiana, Maria, and Anastasia tell how their privileged lives as the daughters of the tsar in early twentieth-century Russia are transformed by world war and revolution.

The Hired Girl by Laura Amy Schlitz (YA F SCH)

Fourteen-year-old Joan Skraggs chronicles her life in a journal when she leaves her family’s farm in Pennsylvania to work as a hired girl in Baltimore in the summer of 1911.

Between Shades of Gray by Ruta Sepetys (YA F SEP)

In 1941, fifteen-year-old Lina, her mother, and brother are pulled from their Lithuanian home by Soviet guards and sent to Siberia, where her father is sentenced to death in a prison camp while she fights for her life, vowing to honor her family and the thousands like hers by burying her story in a jar on Lithuanian soil. Based on the author’s family, includes a historical note.

Out of Shadows by Jason Wallace (YA F WAL)

In 1983, at an elite boys’ boarding school in Zimbabwe, thirteen-year-old English lad Robert Jacklin finds himself torn between his black roommate and the white bullies still bitter over losing power through the recent civil war.

Like Water on Stone by Dana Walrath (YA F WAL)

Inspired by a true story, this relates the tale of siblings Sosi, Shahen, and Mariam who survive the Armenian genocide of 1915 by escaping from Turkey alone over the mountains.

After crash-landing in France in 1943 and being captured by Nazis, a female wireless operator for the British (who goes by Queenie, Eva, Verity, and various other aliases) reveals bits of code in exchange for reprieve from torture…and to postpone her execution.

And I Darken by Kiersten White (YA F WHI)

In this first book in a trilogy a girl child is born to Vlad Dracula, in Transylvania, in 1435–at first rejected by her father and always ignored by her mother, she will grow up to be Lada Dragwlya, a vicious and brutal princess, destined to rule and destroy her enemies.

In the Shadow of Blackbirds by Cat Winters (YA F WIN)

In San Diego in 1918, as deadly influenza and World War I take their toll, sixteen-year-old Mary Shelley Black watches desperate mourners flock to seances and spirit photographers for comfort and, despite her scientific leanings, must consider if ghosts are real when her first love, killed in battle, returns.

In 1898 China, Little Bao has had enough of foreign missionaries and soldiers robbing peasants, and he recruits an army of Boxers to fight to free China from its oppressors. Meanwhile, Vibiana, an unwanted fourth child, finds her name and identity in Christianity, but with the Boxer Rebellion in full swing and Chinese Christians facing death, she must decide whether her loyalties lie with her religion or her country.

The Book Thief by Markus Zusak (YA F ZUS)

Trying to make sense of the horrors of World War II, Death relates the story of Liesel–a young German girl whose book-stealing and story-telling talents help sustain her family and the Jewish man they are hiding, as well as their neighbors.