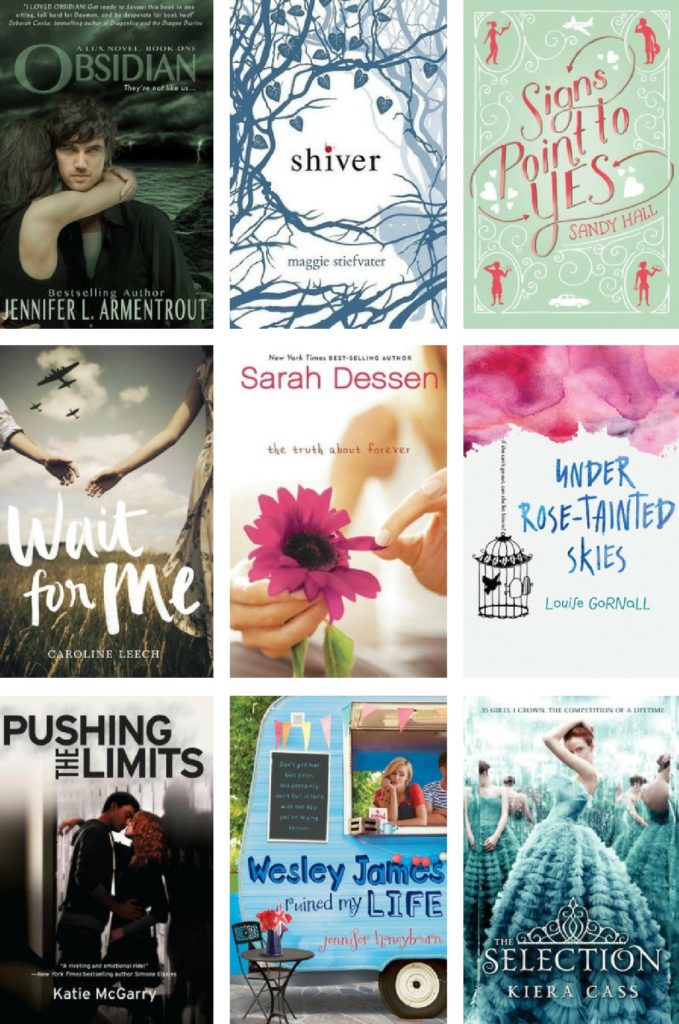 When Katy moves to West Virginia she expects to be bored, until she meets her neighbor who just happens to be an alien.

Galen, prince of the Syrena, is sent to land to find a girl he’s heard can communicate with fish. He finds Emma and after several encounters, including a deadly one with a shark, Galen becomes convinced Emma holds the key to his kingdom.

Sixteen-year-old America Singer is living in the caste-divided nation of Illea, which formed after the war that destroyed the United States. America is chosen to compete in the Selection–a contest to see which girl can win the heart of Illea’s prince–but all she really wants is a chance for a future with her secret love, Aspen, who is a caste below her.

The Truth About Forever by Sarah Dessen (YA F DES)

The summer following her father’s death, Macy plans to work at the library and wait for her brainy boyfriend to return from camp, but instead she goes to work at a catering business where she makes new friends and finally faces her grief.

When wealthy, seemingly perfect Brittany and Alex Fuentes, a gang member from the other side of town, develop a relationship after Alex discovers that Brittany is not exactly who she seems to be, they must face the disapproval of their schoolmates–and others.

Under Rose-Tainted Skies by Louise Gornall (YA F GOR)

Norah has agoraphobia and OCD. She meets Luke when her groceries are left on the porch, and she can’t even step out to get them. As their friendship grows deeper, Norah realizes Luke deserves a normal girl. One who can lie on the front lawn and look up at the stars. One who isn’t so screwed up. Can she let him go, or will she find the strength to face her demons?

Signs Point to Yes by Sandy Hall (YA F HAL)

Jane, who writes Doctor Who fan fiction, has taken a job as a nanny to three little girls. Fortunately for her, this brings her into contact with Teo, her childhood crush. Before they can be together, secrets are revealed and hijinks ensue.

Sixteen-year-old Quinn looks to get even with her worst enemy and now co-worker, Wesley, but when she starts to fall in love with him she has to decide whether she she wants to get revenge or get the boy.

But I love Noah. And he loves me. We met and fell in love in the sleepy farming community of Meadowview, while we rode our horses together through the grassy fields and in those moments in each other’s arms. It should be Rose & Noah forever, but it won’t be. Because he’s Amish and I’m not.

Seventeen-year-old Oregon teenager Kelsey forms a bond with a circus tiger who is actually one of two brothers, Indian princes Ren and Kishan, who were cursed to live as tigers for eternity, and she travels with him to India where the tiger’s curse may be broken once and for all.

When Shabnab’s best friend starts wearing a Muslim headscarf, she feels alienated until taking a summer job that leads to falling in love with a friend in ways that remind her of the rose and nightingale of classic Urdu poetry.

Suspected in the death of her boyfriend, seventeen-year-old Luce is sent to a Savannah, Georgia, reform school where she meets two intriguing boys and learns the truth about the strange shadows that have always haunted her.

Wait for Me by Caroline Leech (YA F LEE)

A farmer’s daughter pursues a forbidden relationship with a German POW assigned to farmhand labor in 1945 Scotland, where their romance puts her home and his freedom at risk.

Known to him/herself only as “A,” the narrator of this philosophically electrifying novel wakes up every morning in the body of a different person. This constant, inexplicable change — A is usually around the same age but has experienced different genders, ethnicities, personality types, etc. — has made A unusually circumspect, mature, and careful not to alter anything that would impact the lives of those whose bodies s/he’s inhabited. It makes for a lonely existence…until A falls in love with a girl named Rhiannon and breaks those rules, just to see her again.

The Radius of Us by Marie Marquardt (YA F MAR)

Told in alternating voices, follows the growing relationship of two teenaged victims of violence who are struggling to overcome trauma and help each other cope.

While reluctantly staying with her biological father, a member of a motorcycle club, sheltered seventeen-year-old Emily falls for the youth her father asked to protect her from a rival club with a score to settle.

Evermore (The Immortals #1) by Alyson Noel (YA F NOE)

Since the car accident that claimed the lives of her family, sixteen-year-old Ever can see auras and hear people’s thoughts, and she goes out of her way to hide from other people until she meets Damen, another psychic teenager who is hiding even more mysteries.

Who wouldn’t jump at the chance to spend her senior year at a boarding school in Paris? Anna Oliphant, that’s who. Besides barely speaking French, Anna is perfectly happy at home in Atlanta, Georgia. But Anna’s father insists, so Paris it is. And Anna does warm up to the city…especially after she meets gorgeous Etienne St. Clair, who seems to return her interest but already has a girlfriend. — Description by Ellen Foreman.

Aria and Perry, two teens from radically different societies–one highly advanced, the other primitive–hate being dependent on one another until they overcome their prejudices and fall in love, knowing they can’t stay together.

Set over the course of one school year in 1986, this is the story of two star-crossed misfits–smart enough to know that first love almost never lasts, but brave and desperate enough to try.

The Statistical Probability of Love at First Sight by Jennifer E. Smith (YA F SMI)

Hadley’s father is getting remarried, and while Hadley is (much) less than thrilled about it, she’s traveling to England to be a part of his wedding. After missing her flight to London by just four minutes, Hadley gets rebooked on another flight…where she meets Oliver.

In all the years she has watched the wolves in the woods behind her house, Grace has been particularly drawn to an unusual yellow-eyed wolf who, in his turn, has been watching her with increasing intensity. One day she finds a boy with yellow eyes waiting for her, and she knows it’s her wolf.