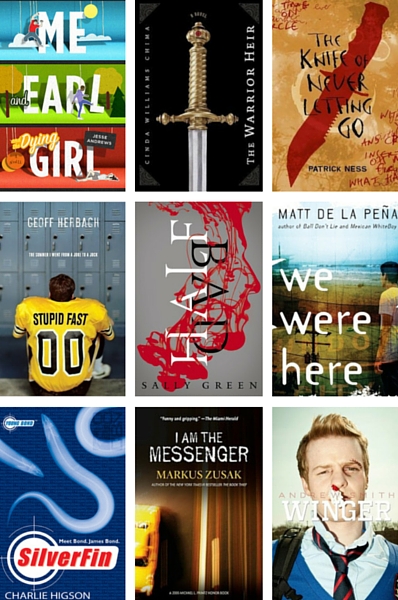 Greg has managed to become part of every social group at his Pittsburgh high school without having any friends, but his life changes when his mother forces him to befriend Rachel, a girl he once knew in Hebrew school who has leukemia.

The Compound by S.A. Bodeen (YA F BOD)

After his parents, two sisters, and he have spent six years in a vast underground compound built by his wealthy father to protect them from a nuclear holocaust, fifteen-year-old Eli, whose twin brother and grandmother were left behind, discovers that his father has perpetrated a monstrous hoax on them all.

After learning about his magical ancestry and his own warrior powers, sixteen-year-old Jack embarks on a training program to fight enemy wizards.

Groomed by his father to be a star player, football is the only thing that has ever really mattered to Mick Johnson, who works hard for a spot on the varsity team his freshman year, then tries to hold onto his edge by using steroids, despite the consequences to his health and social life.

When fifteen-year-old Will is rejected by battleschool, he becomes the reluctant apprentice to the mysterious Ranger Halt, and winds up protecting the kingdom from danger.

In modern-day England, where witches live alongside humans, Nathan, son of a White witch and the most powerful Black witch, must escape captivity before his seventeenth birthday and receive the gifts that will determine his future.

Stick, a star football player who’s become disenchanted with the game, becomes friends with Preston, a nerdy kid who fights crime by night.

No Limit by Pete Hautman (YA F HAU)

One minute, Denn’s life is perfect. The next, his friends ask him to join them in a game of poker. Now Denn can’t stop winning.

Just before his sixteenth birthday, Felton Reinstein has a sudden growth spurt that turns him from a small, jumpy, picked-on boy with the nickname of “Squirrel Nut” to a powerful athlete, leading to new friends, his first love, and the courage to confront his family’s past and current problems.

Prequel to the adventures of James Bond, 007, introduces the young James when he is just starting boarding school in England and is about to become involved in his first adventure.

Sent to live in a foster home in a remote Yorkshire village, Matt, a troubled fourteen-year-old English boy, uncovers an evil plot involving witchcraft and the site of an ancient stone circle.

When Paul falls hard for Noah, he thinks he has found his one true love, but when Noah walks out of his life, Paul has to find a way to get him back and make everything right once more.

Jasper “Jazz” Dent is the son of Billy Dent, the country’s most notorious serial killer, and “Dear Old Dad” taught him everything he knew. But Billy’s in prison now and Jazz wants to convince the world — and himself — that he’s not like his father. When several murders occur in his town, Jazz and his friend Howie try to track down the killer before he strikes again.

After the eruption of the Yellowstone supervolcano destroys his city and its surroundings, fifteen-year-old Alex must journey from Cedar Falls, Iowa, to Illinois to find his parents and sister, trying to survive in a transformed landscape and a new society in which all the old rules of living have vanished.

Seventeen-year-old Richie Perry, just out of his Harlem high school, enlists in the Army in the summer of 1967 and spends a devastating year on active duty in Vietnam.

Pursued by power-hungry Prentiss and mad minister Aaron, young Todd and Viola set out across New World searching for answers about his colony’s true past and seeking a way to warn the ship bringing hopeful settlers from Old World.

We Were Here by Matt de la Pena (YA F PEN)

Haunted by the event that sentences him to time in a group home, Miguel breaks out with two unlikely companions and together they begin their journey down the California coast hoping to get to Mexico and a new life.

At age eight, David watched as his father was killed by an Epic, a human with superhuman powers, and now, ten years later, he joins the Reckoners–the only people who are trying to kill the Epics and end their tyranny.

Two years younger than his classmates at a prestigious boarding school, fourteen-year-old Ryan Dean West grapples with living in the dorm for troublemakers, falling for his female best friend who thinks of him as just a kid, and playing wing on the Varsity rugby team with some of his frightening new dorm-mates.

I Am the Messenger by Marcus Zusak (YA F ZUS)

After capturing a bank robber, nineteen-year-old cab driver Ed Kennedy begins receiving mysterious messages that direct him to addresses where people need help, and he begins getting over his lifelong feeling of worthlessness.