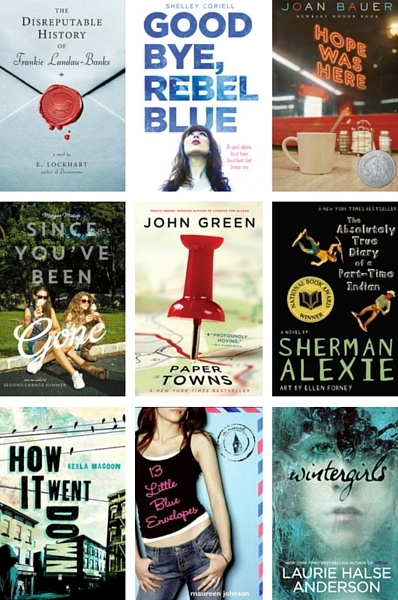 Budding cartoonist Junior leaves his troubled school on the Spokane Indian Reservation to attend an all-white farm town school where the only other Indian is the school mascot.

Wintergirls by Laurie Halse Anderson (YA F AND)

Eighteen-year-old Lia comes to terms with her best friend’s death from anorexia as she struggles with the same disorder.

Hope was Here by Joan Bauer (YA F BAU)

When Hope and the aunt who has raised her move from Brooklyn to Mulhoney, Wisconsin, to work as waitress and cook in the Welcome Stairways diner, they become involved with the diner owner’s political campaign to oust the town’s corrupt mayor.

Cameron Smith, a disaffected sixteen-year-old who, after being diagnosed with Creutzfeld Jakob’s (aka mad cow) disease, sets off on a road trip with a death-obsessed video gaming dwarf he meets in the hospital in an attempt to find a cure.

When Reed Brennan wins a scholarship to Easton Academy, she quickly discovers that the Billings Girls are the most beautiful, intelligent, and powerful group on campus, so Reed tries to become a member.

Sixteen-year-old Valerie, whose boyfriend Nick committed a school shooting at the end of their junior year, struggles to cope with integrating herself back into high school life, unsure herself whether she was a hero or a villain.

The Fortunes of Indigo Skye by Deb Caletti (YA F CAL)

Indigo is looking forward to becoming a full-time waitress after high school graduation, but her life is turned upside down by a large check given to her by a customer who appreciates that she cares enough to scold him about smoking.

Two sophomore girls, best friends since kindergarten, grow apart when one wants new friends and decides the other is a popularity liability.

Rebecca “Rebel” Blue, a loner rebel and budding artist, reluctantly completes the bucket list of Kennedy Green, an over-committed do-gooder classmate who dies in a car accident following a stint in detention where both girls were forced to consider their morality and write bucket lists.

One month before graduating from his Central Florida high school, Quentin “Q” Jacobsen basks in the predictable boringness of his life until the beautiful and exciting Margo Roth Spiegelman, Q’s neighbor and classmate, takes him on a midnight adventure and then mysteriously disappears.

Lara Jean writes love letters to all the boys she has loved and then hides them in a hatbox until one day those letters are accidentally sent.

When Ginny receives a packet of mysterious envelopes from her favorite aunt, she leaves New Jersey to criss-cross Europe on a sort of scavenger hunt that transforms her life.

Jordan Woods, captain and quarterback of her high school football team, seeks an athletic college scholarship, but when Ty Green joins the team and takes her position, her scholarship chances and her camaraderie with the team are threatened.

Scarlett, a sixteen-year-old private detective in the fictional city of Las Almas, finds herself at the center of a mysterious case–involving ancient curses, priceless artifacts, and jinn–as she discovers that her own family secrets may have more to do with the situation than she thinks.

The Disreputable History of Frankie Landau-Banks by E. Lockhart (YA F LOC)

Sophomore Frankie starts dating senior Matthew Livingston, but when he refuses to talk about the all-male secret society that he and his friends belong to, Frankie infiltrates the society in order to enliven their mediocre pranks.

How it Went Down by Kekla Magoon (YA F MAG)

When sixteen-year-old Tariq Johnson is shot to death, his community is thrown into an uproar because Tariq was black and the shooter, Jack Franklin, is white, and in the aftermath everyone has something to say, but no two accounts of the events agree.

Abandoned by her drug-addicted mother at the age of eleven, high school student Taylor Markham struggles with her identity and family history at a boarding school in Australia.

Rachel Walker is devoted to God and her large family, but as her curiosity about the world her parents turned from grows and she finds that neither Calvary Christian Church nor her homeschool education has the answer she craves, she considers leaving her sheltered life, as an older sister did.

Since You’ve Been Gone by Morgan Matson (YA F MAT)

Quiet Emily’s sociable and daring best friend, Sloane, has disappeared leaving nothing but a random list of bizarre tasks for her to complete, but with unexpected help from popular classmate Frank Porter, Emily gives them a try.

Informed that a bully she does not know is determined to beat her up, Latin American teen Piddy Sanchez struggles to learn more about the father she has never met, until the bully’s gang forces her to confront more difficult challenges.

Meant to Be by Lauren Morrill (YA F MOR)

During an educational trip to London, away from her friends and the boy she thinks she is fated to love, Massachussets high school junior Julia Lichtenstein is paired with her nemesis, Jason, and begins seeing many things differently.

After spending her summer running the family farm and training the quarterback for her school’s rival football team, sixteen-year-old D.J. decides to go out for the sport herself, not anticipating the reactions of those around her.

I Am Princess X by Cherie Priest (YA F PRI)

Years after writing stories about a superheroine character she created with a best friend who died in a tragic car accident, sixteen-year-old May is shocked to see stickers, patches, and graffiti images of the superheroine appearing around Seattle.

Gabi, a Girl in Pieces by Isabel Quintero (YA F QUI)

Gabi Hernandez chronicles her senior year in high school as she copes with her friend Cindy’s pregnancy, friend Sebastian’s coming out, her father’s meth habit, her own cravings for food and cute boys, and especially, the poetry that helps forge her identity.

The Hate U Give by Angie Thomas (YA F THO)

After witnessing her friend’s death at the hands of a police officer, Starr Carter’s life is complicated when the police and a local drug lord try to intimidate her in an effort to learn what happened the night Kahlil died.

The Running Dream by Wendelin van Draanen (YA F VAN)

When a school bus accident leaves sixteen-year-old Jessica an amputee, she returns to school with a prosthetic limb and her track team finds a wonderful way to help rekindle her dream of running again.