New to YA: Great Titles for Younger Teens 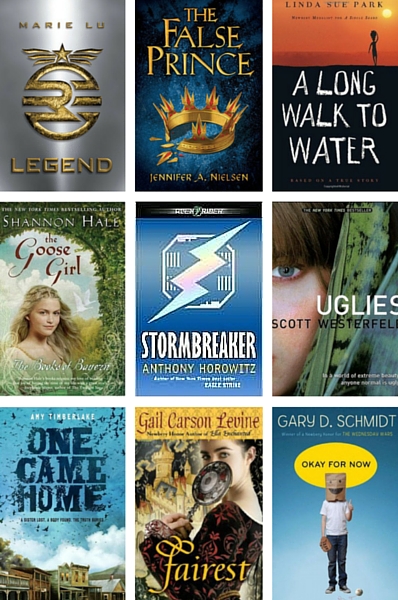 I’d Tell You I Love You, But Then I’d Have to Kill You (Gallagher Sisters #1) by Ally Carter (YA F CAR)

As a sophomore at a secret spy school and the daughter of a former CIA operative, Cammie is sheltered from “normal teenage life” until she meets a local boy while on a class surveillance mission.

Cassia has always trusted the Society to make the right choices for her, so when Xander appears on-screen at her Matching ceremony, Cassia knows he is her ideal mate–until Ky Markham’s face appears for an instant before the screen fades to black.

Meg and Charles Wallace set out with their friend Calvin in a search for their father. His top secret job as a physicist for the government has taken him away and the children search through time and space to find him.

Michael Vey, a fourteen-year old who has Tourette’s syndrome and special electric powers, finds there are others like him, and must rely on his powers to save himself and the others from a diabolical group seeking to control them.

A retelling of the tale of twelve princesses who wear out their shoes dancing every night, and of Galen, a former soldier now working in the king’s gardens, who follows them in hopes of breaking the curse.

In a small town on the coast of California, everyone over the age of fourteen suddenly disappears, setting up a battle between the remaining town residents and the students from a local private school, as well as those who have “The Power” and are able to perform supernatural feats and those who do not.

In this continuation of the Cinderella story, fifteen-year-old Ella finds that accepting Prince Charming’s proposal ensnares her in a suffocating tangle of palace rules and royal etiquette, so she plots to escape.

On her way to marry a prince she’s never met, Princess Anidori is betrayed by her guards and her lady-in-waiting and must become a goose girl to survive until she can reveal her true identity and reclaim the crown that is rightfully hers.

The Clique (The Clique #1) by Lisi Harrison (YA F HAR)

Wealthy Massie is determined to exclude middle class Claire, the daughter of her father’s old friend, from her seventh-grade clique at a very exclusive private school in Westchester, New York, but after Massie steals her only friend, Claire strikes back.

After the death of the uncle who had been his guardian, fourteen-year-old Alex Rider is coerced to continue his uncle’s dangerous work for Britain’s intelligence agency, MI6.

Twelve-year-old Nick loves soccer and hates books, but soon learns the power of words as he wrestles with problems at home, stands up to a bully, and tries to impress the girl of his dreams.

In a land where beauty and singing are valued above all else, Aza eventually comes to reconcile her unconventional appearance and her magical voice, and learns to accept herself for who she truly is.

March: Book One by John Lewis (YA F LEW)

A first-hand account of the author’s lifelong struggle for civil and human rights spans his youth in rural Alabama, his life-changing meeting with Martin Luther King, Jr., and the birth of the Nashville Student Movement.

In a dark future, when North America has split into two warring nations, fifteen-year-olds Day, a famous criminal, and prodigy June, the brilliant soldier hired to capture him, discover that they have a common enemy.

Pitching prodigy Michael Arroyo is on the run from social services after being banned from playing Little League baseball because rival coaches doubt he is only twelve years old and he has no parents to offer them proof.

The False Prince (The Ascendance Trilogy #1) by Jennifer A. Nielsen (YA F NIE)

In the country of Carthya, a devious nobleman engages four orphans in a brutal competition to be selected to impersonate the king’s long-missing son in an effort to avoid a civil war.

When the Sudanese civil war reaches his village in 1985, eleven-year-old Salva becomes separated from his family and must walk with other Dinka tribe members through southern Sudan, Ethiopia, and Kenya in search of safe haven. Based on the life of Salva Dut, who, after emigrating to America in 1996, began a project to dig water wells in Sudan.

In Alagaesia, a fifteen-year-old boy of unknown lineage called Eragon finds a mysterious stone that weaves his life into an intricate tapestry of destiny, magic, and power, peopled with dragons, elves, and monsters.

After the mutant Erasers abduct the youngest member of their group, the “birdkids,” who are the result of genetic experimentation, take off in pursuit and find themselves struggling to understand their own origins and purpose.

Okay for Now by Gary Schmidt (YA F SCH)

While Doug struggles to be more than the thug that his teachers and the police think him to be, he finds an unlikely ally in Lil Spicer, as they explore Audubon’s art.

In this story about the perils of popularity, the courage of nonconformity, and the thrill of first love, an eccentric student named Stargirl changes Mica High School forever.

One Came Home by Amy Timberlake (YA F TIM)

In 1871 Wisconsin, thirteen-year-old Georgia sets out to find her sister Agatha, presumed dead when remains are found wearing the dress she was last seen in, and before the end of the year gains fame as a sharpshooter and foiler of counterfeiters.

In alternating chapters, two teenagers describe how their feelings about themselves, each other, and their families have changed over the years.

In an alternate 1914 Europe, fifteen-year-old Austrian Prince Alek, on the run from the Clanker Powers who are attempting to take over the globe using mechanical machinery, forms an uneasy alliance with Deryn who, disguised as a boy to join the British Air Service, is learning to fly genetically-engineered beasts.

Just before their sixteenth birthdays, when they will will be transformed into beauties whose only job is to have a great time, Tally’s best friend runs away and Tally must find her and turn her in, or never become pretty at all.