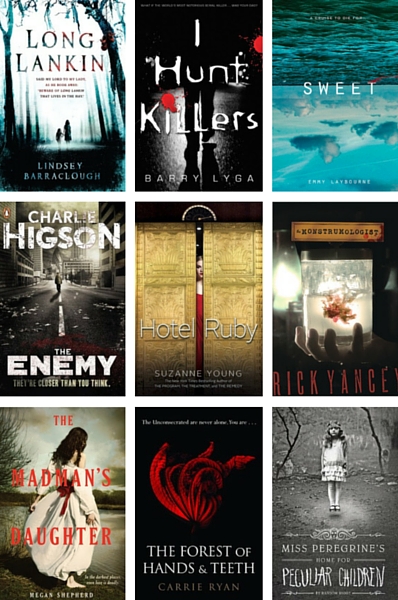 Shutter by Courtney Alameda (YA F ALA)

Seventeen-year-old Micheline Helsing is a tetrachcromat, able to see ghosts in color and capture them on film, but when a routine hunt goes awry, Micheline’s infected with a curse known as a soulchain and if she’s unable to exorcise the entity in seven days, she’ll be destroyed, body and soul.

When Lexi’s sister Kasey begins behaving strangely and their old Victorian house seems to take on a life of its own, Lexi discovers some frightening facts about previous occupants of the house, leading her to believe that many lives are in danger.

When Cora and her younger sister, Mimi, are sent to stay with their great Auntie Ida in an isolated village in 1958, they discover that they are in danger from a centuries-old evil and, along with village boys Roger and Peter, strive to uncover the horrifying truth before it is too late.

The haunting starts even before Sophie arrives on the Isle of Skye to spend the summer with her cousins, but when she arrives she finds a house haunted by the ghost of a girl who attended school there a hundred years ago, as well as cousin Rebecca who died young and is never mentioned by her family–and she must somehow solve the mystery of the frozen Charlotte dolls before the whole family is destroyed.

The Coldest Girl in Coldtown by Holly Black (YA F BLA)

When seventeen-year-old Tana wakes up following a party in the aftermath of a violent vampire attack, she travels to Coldtown, a quarantined Massachusetts city full of vampires, with her ex-boyfriend and a mysterious vampire boy in tow.

Through the Woods by Emily Carroll  (YA F CAR)

A chilling collection of stories for lovers of fairy tales, horror, and the dangers that lurk in the woods.

The Wrong Train by Jeremy de Quidt (YA F DEQ)

A treasury of scary stories envisions the experiences of a train passenger who becomes subject to the nightmarish elements in stories told by a mysterious stranger, who demands a terrible price to make the stories end.

The Fall by Bethany Griffin (YA F GRI)

A retelling of Edgar Allen Poe’s ‘The Fall of the House of Usher’ in which Madeline and her twin brother, Roderick, suffer from the Usher family illness but she hears the House talking to her, filling her dreams, controlling her actions, and ensuring she never leaves the property.

In post-World War I England, eleven-year-old Triss nearly drowns in a millpond known as “The Grimmer” and emerges with memory gaps, aware that something is terribly wrong, and to try to set things right, she must meet a twisted architect who has designs on her family.

After a disease turns everyone over sixteen into brainless, decomposing, flesh-eating creatures, a group of teenagers leave their shelter and set out of a harrowing journey across London to the safe haven of Buckingham Palace.

The Rains by Gregg Hurwitz (YA F HUR)

When the adults in Creek’s Cause turn into ferocious, inhuman beings, Chance Rain and his older brother, Patrick, take refuge with other kids at the school, where they work to find the source of the plague.

And the Trees Crept In by Dawn Kurtagich (YA F KUR)

Sisters Silla, seventeen, and Nori, four, are trapped in their aunt’s cursed manor and can only escape with the help of a mysterious boy.

The luxurious celebrity cruise launching the trendy new diet sweetener Solu should be the vacation of a lifetime. It takes a horrifyingly wrong turn when the gig becomes an expose on the shocking side effects of Solu.

Jasper “Jazz” Dent is the son of Billy Dent, the country’s most notorious serial killer, and “Dear Old Dad” taught him everything he knew. But Billy’s in prison now and Jazz wants to convince the world — and himself — that he’s not like his father. When several murders occur in his town, Jazz and his friend Howie try to track down the killer before he strikes again.

After the zombie apocalypse, teens must find work by the age of 15 if they want to keep their food ration. And that’s why lazy, resentful, 15-year-old Benny reluctantly leaves the safety of home and joins his bounty-hunting half-brother Tom in the zombie-riddled wilds of the Rot and Ruin. As the brothers encounter villains far more inhuman than the undead, Benny begins to question his understanding not only of Tom, but also of life, death, and what bravery really means.

Moving from Texas to Washington, Sunshine, an adopted sixteen-year-old, discovers that her new home is haunted and that the ghosts may have revelations about her past.

The Gathering (Shadow House #1) by Dan Poblocki (YA F POB)

Poppy Caldwell is an orphan who keeps seeing a figure standing behind her in the mirror at the group home where she lives, but she does not associate this ghost with the letter that mysteriously appears in her file, claiming to be from a long-lost aunt, and inviting her to Larkspur House–and she is just one of five children who find themselves gathered in this strange house with a deadly past, and apparently no intention of letting the children escape.

After a family tragedy, Jacob feels compelled to explore an abandoned orphanage on an island off the coast of Wales, discovering disturbing facts about the children who were kept there.

Through twists and turns of fate, orphaned Mary seeks knowledge of life, love, and especially what lies beyond her walled village and the surrounding forest, where dwell the Unconsecrated, aggressive flesh-eating people who were once dead.

Scary Out There edited by Jonathan Maberry (YA F SCA)

Dr. Moreau’s daughter, Juliet, travels to her estranged father’s island, only to encounter murder, medical horrors, and a love triangle.

In a future world where those between the ages of thirteen and eighteen can have their lives “unwound” and their body parts harvested for use by others, three teens go to extreme lengths to uphold their beliefs–and, perhaps, save their own lives.

When fourteen-year-old Alex is framed for murder, he becomes an inmate in the Furnace Penitentiary, where brutal inmates and sadistic guards reign, boys who disappear in the middle of the night sometimes return weirdly altered, and escape might just be possible.

Ever since a car accident killed her father and gave her a severe concussion, high school junior Lisa has been plagued by nightmares and hallucinations, but when she accepts a babysitting job in hopes it will banish the disturbing images, she faces new terror as she begins to question exactly who–or what–she is babysitting.

The Dogs by Allan Stratton (YA F STR)

Cameron’s mother tells him that his father is following them. That’s why they have to always be on the move, and always be one step ahead of him. When they move to a farmhouse in the middle of nowhere, Cameron hears and sees things that shouldn’t-that can’t-be real. He must find the answers to mysteries of the past and the present-before the dogs find him.

In 1888 New England, monster-hunting doctor Pellinore Warthrop and his apprentice Will Henry encounter an Anthropophagus — a headless, supposedly extinct monster that has teeth in its belly and feeds on humans — and the two of them must track and kill an entire pod of the beasts. Alternately flowery and dripping with gore, the writing is lush and compelling; it will transport you to the Victorian age…and scare your trousers off.

Hotel Ruby by Suzanne Young (YA F YOU)

On the way to spend a summer with her grandmother after the sudden death of her mother, seventeen-year-old Audrey, her older brother Daniel, and their father happen upon the Hotel Ruby, a luxurious place filled with unusual guests and little chance of ever leaving.