The Boy Who Dared by Susan Campbell Bartoletti (YA F BAR) 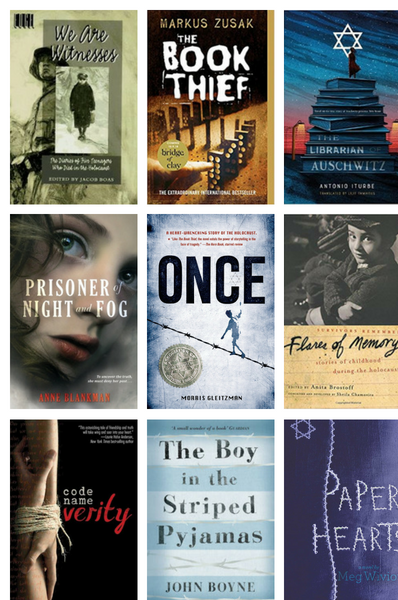 In October, 1942, seventeen-year-old Helmuth Hubener, imprisoned for distributing anti-Nazi leaflets, recalls his past life and how he came to dedicate himself to bring the truth about Hitler and the war to the German people.

In 1930s Munich, the favorite niece of rising political leader Adolph Hitler is torn between duty and love after meeting a fearless and handsome young Jewish reporter.

Boy in the Striped Pajamas by John Boyne (YA F BOY)

Bored and lonely after his family moves from Berlin to a place called “Out-With” in 1942, Bruno, the son of a Nazi officer, befriends a boy in striped pajamas who lives behind a
wire fence.

After living in an Catholic orphanage for nearly four years, a naive Jewish boy runs away and embarks on a journey across Nazi occupied Poland to find his parents.

An epic, genre-bending, and transformative new series that reimagines World War II with girl soldiers fighting on the front lines.

It is 1943, and thirteen-year-old Michael is son of the Irish ambassador to Nazi Germany in Berlin, but is also a spy for the British Secret Service.

Girl in the Blue Coat by Monica Hesse (YA F HES)

In 1943 Nazi-occupied Amsterdam, teenage Hanneke–a ‘finder’ of black market goods–is tasked with finding a Jewish girl who has seemingly vanished into thin air, and is pulled into a web of resistance activities and secrets as she attempts to solve the mystery and save the missing girl.

The Librarian of Auschwitz by Antonio Iturbe (YA F ITU)

Follows the true story of Dita Kraus, a fourteen-year-old girl from Prague who after being sent to Auschwitz is chosen to protect the eight volumes prisoners have smuggled past the guards.

As two British children are being hunted by German agents, British spy Charles Henderson is trying to reach them first, but to do it he must depend on the help of a twelve-year-old French orphan.

Salt to the Sea by Ruta Sepetys (YA F SEP)

Told in short snippets, Salt to the Sea rotates between four narrators attempting to escape various tragedies in 1945 Europe.

The Berlin Boxing Club by Robert Sharenow (YA F SHA)

In 1936 Berlin, fourteen-year-old Karl Stern, considered Jewish despite a non-religious upbringing, learns to box from the legendary Max Schmeling while struggling with the realities of the Holocaust.

After being captured by Nazis in 1943 France, a female wireless operator for the British
reveals bits of code to postpone her execution.

Follows the story of two girls as they forge a powerful friendship that carries them through horrific circumstances.

The Book Thief by Marcus Zusak (YA F ZUS)

This is the story of a young German girl whose book-stealing and story-telling talents help sustain her family and the Jewish man they are hiding.

We Are Witnesses: Five Diaries of Teenagers Who Died in the Holocaust by Jacob Boas (BIOGRAPHY 940.5318 WEA)

Flares of Memory: Stories of Childhood During the Holocaust edited by Anita Brostoff with Sheila Chamovitz (BIOGRAPHY 920 FLA)

Contains memories of childhood during the Holocaust, recalling the humiliation, suffering, and triumph experienced by children as they endured mistreatment at the hands of the Nazis.