Leah on the Offbeat by Becky Albertalli (YA F ALB) With prom and graduation around the corner, senior Leah Burke struggles when her group of friends start fighting.

Simon vs. the Homo Sapiens Agenda by Becky Albertalli (YA F ALB) Sixteen-year-old, not-so-openly-gay Simon Spier is blackmailed into playing wing man for his classmate or else his sexual identity will be revealed. 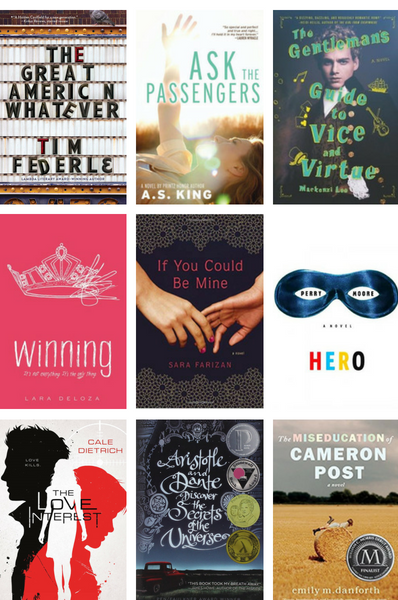 Upside of Unrequited by Becky Albertall (YA F ALB) Avoiding relationships to protect her sensitive heart, plus-sized Molly supports her once-cynical twin, Cassie, when the latter has her own bout of love sickness, a situation that is complicated by sibling dynamics and an unexpected romantic triangle.

The Vast Fields of Ordinary by Nick Burd (YA F BUR) The summer after graduating from an Iowa high school, eighteen-year-old Dade Hamilton watches his parents’ marriage disintegrate, ends his long-term, secret relationship, comes out of the closet, and savors first love.

Jane, Unlimited by Kristin Cashore (YA F CAS) Jane, an umbrella-crafter and college dropout, decides to fulfill a promise to her beloved late Aunt Magnolia—to accept an invitation to visit the mysterious Thrash family home, Tu Reviens. During her visit, Jane reaches a seemingly insignificant moment in time where one action will branch her off into different futures. Each choice results in a different path for Jane that takes her far beyond her previously ordinary life.

The Perks of Being a Wallflower by Stephen Chbosky (YA F CHB) A series of letters to an unknown correspondent reveals the coming-of-age trials of a high schooler named Charlie.

Freakboy by Kristin Elizabeth Clark (YA F CLA) Told from three viewpoints, seventeen-year-old Brendan, a wrestler, struggles to come to terms with his place on the transgender spectrum while Vanessa, the girl he loves, and a transgender acquaintance, try to help.

Naomi and Ely’s No Kiss List by Rachel Cohn (YA F COH) Although they have been friends and neighbors all their lives, straight Naomi and gay Ely find their relationship severely strained during their freshman year at New York University.

Little & Lion by Brandy Colbert (YA F COL) Returning home to Los Angeles from her New England boarding school, Suzette considers staying home for good so that she can be near her friends, her crush, and her recently diagnosed bipolar brother, a situation that is complicated by her growing feelings for the girl her brother loves.

The Miseducation of Cameron Post by Emily M. Danforth (YA F DAN) In the early 1990s, when gay teenager Cameron Post’s family decides she needs to change her ways, she is sent to a gay conversion therapy center.

The Love Interest by Cale Dietrich (YA F DIE) In a secret organization that cultivates teenage spies, the stakes are high for two agents, Caden and Dylan, whose mission becomes complicated when Caden finds himself falling in love with his competition.

Winning by Lara Deloza (YA F DEL) Using her charismatic influence and outwardly nice-girl reputation to manipulate the social scene at her high school, Alexandra aspires to become the homecoming queen and orchestrates the downfall of a rival, with unexpected consequences.

If You Could Be Mine by Sara Farizan (YA F FAR) In Iran, where homosexuality is punishable by death, seventeen-year-olds Sahar and Nasrin love each other in secret until Nasrin’s parents announce their daughter’s arranged marriage.

The Great American Whatever by Tim Federle (YA F FED) Teenaged Quinn, an aspiring screenwriter, copes with his sister’s death while his best friend forces him back out into the world to face his reality.

Whatever by S.J. Goslee (YA F GOS) Junior year is going to be the best ever for slacker Mike until he loses his girlfriend, gets roped into school activities, and becomes totally confused about his sexual orientation after sharing a drunken kiss with a guy.

We Are the Ants by Shaun David Hutchinson (YA F HUT) After the suicide of his boyfriend, Henry deals with depression and family issues, all while wondering if he was really abducted by aliens and has 144 days to decide whether or not the world is worth saving.

Ask the Passengers by A.S. King (YA F KIN) Imagining that she is sending love to passengers in airplanes flying overhead, Astrid Jones struggles with her family’s dysfunction and hides her love for another girl.

Openly Straight by Bill Konigsberg (YA F KON) Tired of being known as “the gay kid”, Rafe Goldberg decides to assume a new persona when he comes east and enters an elite Massachusetts prep school–but trying to deny his identity has both complications and unexpected consequences.

Honestly Ben (Openly Straight #2) by Bill Konigsberg (YA F KON) Ben Carver returns for the spring semester at the exclusive Natick School in Massachusetts determined to put his relationship with Rafe Goldberg behind him and concentrate on his grades and the award that will mean a full scholarship–but Rafe is still there, there is a girl named Hannah whom he meets in the library, and behind it all is his relationship with his distant, but demanding father.

You Know Me Well by Nina LaCour & David Levithan (YA F LAC) Mark and Kate sit next to each other in school but are barely acquainted until they meet at a San Francisco club during Pride Week and connect over each one’s forbidden love.

Gentleman’s Guide to Vice and Virtue by Mackenzi Lee (YA F LEE) Henry “Monty” Montague was bred to be a gentleman. His passions for gambling halls, late nights spent with a bottle of spirits, or waking up in the arms of women or men, have earned the disapproval of his father. His quest for pleasures and vices have led to one last hedonistic hurrah as Monty, his best friend and crush Percy, and Monty’s sister Felicity begin a Grand Tour of Europe. When a reckless decision turns their trip abroad into a harrowing manhunt, it calls into question everything Monty knows, including his relationship with the boy he adores.

Will Grayson, Will Grayson by David Levithan & John Green (YA F LEV) When two teens, one gay and one straight, meet accidentally and discover that they share the same name, their lives become intertwined as one begins dating the other’s best friend, who produces a play revealing his relationship with them both.

Ash by Malinda Lo (YA F LO) In this variation on the Cinderella story, Ash grows up believing in the fairy realm that the king and his philosophers have sought to suppress, until one day she must choose between a handsome fairy cursed to love her and the King’s Huntress whom she loves.

When the Moon was Ours by Anna-Marie Mclemore (YA F MCL) As their deep friendship turns to love, Latina teenager Miel, who grows roses from her wrist, and Italian-Pakistani Samir, a transgender boy, fear their secrets will be exposed by the beautiful Bonner girls, four sisters rumored to be witches.

Wild Beauty by Anna-Marie Mclemore (YA F MCL) For nearly a century, the Nomeolvides women have tended the grounds of La Pradera, hiding a terrible legacy, until mysterious Fel arrives and Estrella helps him explore his dangerous past.

Hero by Perry Moore (YA F MOO) Teenager Thom Creed’s father is an ex-superhero who was disgraced in a terrible tragedy, so when Thom begins to develop superhuman powers, he doesn’t tell his dad. Thom has something else he’s afraid to tell his father: he’s gay. When the prestigious League of Superheroes invites Thom to join, he secretly begins training with a group of oddball recruits. But after a series of hero-murders threaten not only the League but world security, Thom and his team realize it’s up to them to save the day.

Release by Patrick Ness (YA F NES) Struggling with his family’s religious beliefs, an employer’s ultimatum and his unrequited love for his ex, Adam struggles to move on with a best friend and a new relationship while trying to find the courage to stay true to himself.

Radio Silence by Alice Oseman (YA F OSE) A studious girl and a quiet, straight-A boy start a controversial podcast together that challenges their courage and forces them to confront issues in the form of backlash and censorship.

If I Was Your Girl by Meredith Russo (YA F RUS) Amanda Hardy only wants to fit in at her new school, but she is keeping a big secret, so when she falls for Grant, guarded Amanda finds herself yearning to share with him everything about herself, including her previous life as Andrew.

Aristotle and Dante Discover the Secrets of the Universe by Benjamin Alire Sáenz (YA F SAE) Fifteen-year-old Ari Mendoza is an angry loner with a brother in prison, but when he meets Dante and they become friends, Ari starts to ask questions about himself, his parents, and his family that he has never asked before.

Inexplicable Logic of My life by Benjamin Alire Sáenz (YA F SAE) A story set on the American border with Mexico, about family and friendship, life and death, and one teen struggling to understand what his adoption does and doesn’t mean about who he is.

Rainbow Boys by Alex Sanchez (YA F SAN) Three high school seniors, a jock with a girlfriend and an alcoholic father, a closeted gay, and a flamboyant gay rights advocate, struggle with family issues, gay bashers, first sex, and conflicting feelings about each other.

History is all you Left Me by Adam Silvera (YA F SIL) Secrets are revealed as OCD-afflicted Griffin grieves for his first love, Theo, who died in a drowning accident.

They Both Die at the End by Adam Silvera (YA F SIL) In a near-future New York City where a service alerts people on the day they will die, teenagers Mateo Torrez and Rufus Emeterio meet using the Last Friend app and are faced with the challenge of living a lifetime on their End Day.

Timekeeper by Tara Sim (YA F SIM) In an alternate 1875 England, seventeen-year-old clock mechanic Danny, aided by the boy he loves, must discover who is sabotaging the towers that control the flow of time and stop him or her before it is too late.

Winger by Andrew Smith (YA F SMI) Two years younger than his classmates at a prestigious boarding school, fourteen-year-old Ryan Dean West grapples with living in the dorm for troublemakers, falling for his female best friend who thinks of him as just a kid, and playing wing on the Varsity rugby team with some of his frightening new dorm-mates.

Dangerous Art of Blending In by Angelo Surmelis (YA F SUR) Seventeen-year-old Evan Panos doesn’t know where he fits in. His strict immigrant Greek mother refuses to see him as anything but a disappointment. His quiet, workaholic father is a staunch believer in avoiding any kind of conflict. And his best friend, Henry, has somehow become distractingly attractive over the summer.

Highly Illogical behavior by John Corey Whaley (YA F WHA) Agoraphobic sixteen-year-old Solomon has not left his house in three years, but Lisa is determined to change that–and to write a scholarship-winning essay based on the results.