YA Fiction About Dealing With Mental Illness

These fictional titles explain what it can be like to live with a mental illness and how to find help. 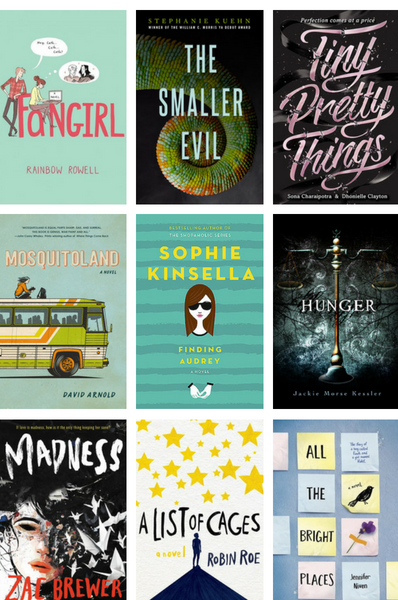 Gigi, Bette, and June, three top students at an exclusive Manhattan ballet school, have seen their fair share of drama. Free-spirited new girl Gigi just wants to dance — but the very act might kill her. Privileged New Yorker Bette’s desire to escape theshadow of her ballet star sister brings out a dangerous edge in her. And perfectionist June needs to land a lead role this year or her controlling mother will put an end to her dancing dreams forever. When every dancer is both friend and foe, the girls will sacrifice, manipulate, and backstab to be the best of the best.

Kristina Snow is the perfect daughter, but she meets a boy who introduces her to drugs and becomes a very different person, struggling to control her life and her mind.

While she is in a rehabilitation facility for drug and alcohol abuse, seventeen-year-old Maddie meets Stewart, who is also in treatment, and they begin a relationship, which they try to maintain after they both get out.

Beneath a Meth Moon: An Elegy by Jacqueline Woodson (PHPL Call Number: YA F WOO)

After losing her mother and grandmother during Hurricane Katrina, Laurel moves to another town and becomes a methamphetamine addict.

A List of Cages by Robin Roe (PHPL Call Number: YA F ROE)

Landing a coveted elective to serve as an aide to the school psychologist, Adam, a student struggling with ADHD, is assigned to track down a troubled freshman he discovers is the foster brother he has not seen in five years.

When she learns that her mother is sick in Ohio, Mim confronts her demons on a thousand-mile odyssey from Mississippi that redefines her notions of love, loyalty, and what it means to be sane.

The Nature of Jade by Deb Caletti (PHPL Call Number: YA F CAL)

Seattle high school senior Jade’s life is defined by her anxiety disorder and dysfunctional family, until she spies a mysterious boy with a baby who seems to share her fascination with the elephants at a nearby zoo.

Waiting for You by Susane Colasanti (PHPL Call Number: YA F COL)

Fifteen-year-old high school sophomore Marisa, who has an anxiety disorder, decides that this is the year she will get what she wants–a boyfriend and a social life–but things do not turn out exactly the way she expects them to.

Chronically sick and anxiety plagued Arman Dukoff runs away to attend a self-actualization retreat where he eventually discovers both a bloody corpse and a sense of self that was not what he bargained for.

Audrey has developed an anxiety disorder but she sees a therapist and is making slow but steady progress. She meets Linus, her brother’s teammate and finds she can talk through her fears with him in a way she’s never been able to do with anyone before.

Everything All at Once by Katrina Leno (PHPL Call Number: YA F LEN)

When her struggles with anxiety worsen in the aftermath of a family death, Lottie is bequeathed a series of letters from her late aunt, a best-selling author, who leaves instructions to help Lottie overcome her fears and explore her own literary voice.

A Seattle fifteen-year-old explains some of the reasons for her recent panic attacks, including breaking up with her boyfriend, losing all her girlfriends, tensions between her performance-artist mother and her father, and more.

The Rest of Us Just Live Here by Patrick Ness (PHPL Call Number: YA F NES)

The best friend of a teen with superhuman qualities endeavors to have a life of his own that is both normal and extraordinary.

How to Disappear by Sharon Huss Roat (PHPL Call Number: YA F ROA)

Living life strictly below the radar after her only friend moves away, Vicky, determined to put off her mother’s intervention, Photoshops herself into pictures that she posts online before meeting numerous people who feel just as alone and ignored as she does.

At turns funny, sweet, smart, and sad, Fangirl traces Cath’s journey to independence as she begins college, struggles to have an identity separate from her twin sister, find her voice and passion as a writer and fall in love, maybe, for the first time.

Agoraphobic sixteen-year-old Solomon has not left his house in three years, but Lisa is determined to change that–and to write a scholarship-winning essay based on the results.

The Weight of Zero by Karen Fortunati (PHPL Call Number: YA F FOR)

A seventeen-year-old suffering from bipolar disease wants to commit suicide, but a meaningful relationship and the care of a gifted psychiatrist alter her perception of her diagnosis as a death sentence.

When sixteen-year-old Rinn, who has bipolar disorder, and her mother move back to her mother’s hometown in Ohio and settle in a house where the previous owner hanged herself, Rinn discovers that both the town and her mother have some uncomfortable secrets in their past and that the ghost that supposedly haunts the school seems to be out for revenge.

When We Collided by Emery Lord (PHPL Call Number: YA F LOR)

Can seventeen-year-old Jonah save his family restaurant from ruin, his mother from her sadness, and his danger-seeking girlfriend Vivi from herself?

All the Bright Places by Jennifer Niven (PHPL Call Number: YA F NIV)

When Theodore Finch and Violet Markey meet on the ledge of the bell tower at school–both teetering on the edge–it’s the beginning of an unlikely relationship in a  moving exploration of grief, suicide and young love.

Eighteen-year-old Lia comes to terms with her best friend’s death from anorexia as she struggles with the same disorder.

After the death of their father, two sisters struggle with various issues, including their family history, personal relationships, and an extreme eating disorder.

Seventeen-year-old Lisabeth has anorexia, and even turning into Famine–one of the Four Horsemen of the Apocalypse–cannot keep her from feeling fat and worthless.

An autobiographical novel in which fifteen-year-old Jennifer Johnson convinces her parents to commit her to the Eating Disorders Unit of an upstate New York psychiatric hospital in 1988, where the treatment for her bulimia and anorexia is not what she expects.

The YouTube slam poetry star of Shrinking Women presents a novel in verse centering around the challenges of body image, tracing the experiences of a teen who develops bulimia in her effort to find purpose, control and confidence in response to her family’s dysfunction and a best friend’s estrangement.

Released from an inpatient facility after treatment for a suicide attempt, Brooke gradually begins to see hope in her life and meets Derek, a fellow suicide survivor, but as she falls for him, she realizes that Derek may not be in the same mental space she is.

Romancing the Dark in the City of Light by Ann Jacobus (PHPL Call Number: YA F JAC)

In the aftermath of a car accident that kills her boyfriend and throws her carefully planned future into complete upheaval, high school senior Wren retreats to the deep woods of Maine to live with the artist father she barely knows and meets a boy who threatens to pull her from her safe, hard-won exile.

A World Without You by Beth Revis (PHPL Call Number: YA F REV)

After the unexpected loss of his girlfriend, a teenage boy suffering from delusions is convinced that he can travel through time to save her.

When Victoria Cruz wakes up in the psychiatric ward of a Texas hospital after her failed suicide attempt, she still has no desire to live, but as the weeks pass, she begins to reflect on the reasons why she feels like a loser compared with the rest of her family, and to see a path ahead where she can make a life of her own.

Follows three teens in a small town whose lives intersect in ways they never expected, teaching them that there are no one-size-fits-all definitions of depression, friendship, and love.

A humorous account of a New York City teenager’s battle with depression and his time spent in a psychiatric hospital.

Will teenaged Norah, who is struggling with agoraphobia and OCD, accept that she could be the right one for sweet, funny Luke?

Turtles All the Way Down by John Green (PHPL Call Number: YA F GRE)

Sixteen-year-old Denn finds himself alienating both friends and family when he becomes obsessed with playing high-stakes poker with adult gamblers.

In 1994, Fig looks back on her life and relates her experiences, from age six to nineteen, as she desperately tries to save her mother from schizophrenia while her own mental health and relationships deteriorate.

History is All You Left Me by Adam Silvera (PHPL Call Number: YA F SIL)

Secrets are revealed as OCD-afflicted Griffin grieves for his first love, Theo, who died in a drowning accident.

Consumed by a stream of dark thoughts and worries that she can’t turn off, a girl coping with Purely-Obsessional OCD learns to accept herself and take control of her life through her experiences in poetry club.

The Unlikely Hero of Room 13B by Teresa Toten (PHPL Call Number: YA F TOT)

Adam not only is trying to understand his OCD, while trying to balance his relationship with his divorced parents, but he’s also trying to navigate through the perils of love.

Seventeen-year-old Calvin, who was born on the day that the last Calvin and Hobbes comic strip was published, is stricken by a schizophrenic episode and begins having conversations with the tiger, Hobbes. Struggling to regain control of his mind and destiny, Calvin becomes convinced that he’ll get better if the strip’s creator, Bill Watterson, will draw just one more comic.

Sixteen-year-old Willow, who was driving the car that killed both of her parents, copes with the pain and guilt by cutting herself, until she meets a smart and sensitive boy who is determined to help her stop.

Sixteen-year-old Missy copes with being an outcast at school and stress at home by cutting herself with a razor blade, until Death chooses her as one of the Four Horsemen of the Apocalypse, War, and offers her a new blade.

While confined to a mental hospital, thirteen-year-old Callie slowly comes to understand some of the reasons behind her self-mutilation, and gradually starts to get better.

Fifteen-year-old Kendra, a budding artist, has not felt safe since she began to recall devastating memories of childhood sexual abuse, especially since she cannot remember her abuser’s identity, and she copes with the pressure by cutting herself.

The Impossible Knife of Memory by Laurie Halse Anderson (PHPL Call Number: YA F AND)

Hayley Kincaid and her father move back to their hometown to try a “normal” life, but the horrors he saw in the war threaten to destroy their lives.

A Blue So Dark by Holly Schindler (PHPL Call Number: YA F SCH)

As Missouri fifteen-year-old Aura struggles alone to cope with the increasingly severe symptoms of her mother’s schizophrenia, she wishes only for a normal life, but fears that her artistic ability and genes will one day result in her own insanity.

Make It OK (A campaign to reduce mental illness stigma)

Also check out: “The Hilarious World of Depression” (Podcast)